This Must Be The Place

Written on August 29, 2019 by Elizabeth Gandhi in supernatural office travelogue with 0 comments

India again. This must be the place.

When you land at New Delhi airport, you are greeted by the grandest hall with huge hands in mudra positions. Huge, monumental and welcoming. This is my third time in India. This time I didn’t cause a delay in air traffic, so the journey ran smoothly. On the flight from Belgrade to Beijing, I even got upgraded to first class because a friend of mine was working at the airport at that time. And why wouldn’t I? I am now practicing saying yes to everything that offers itself as a possibility. 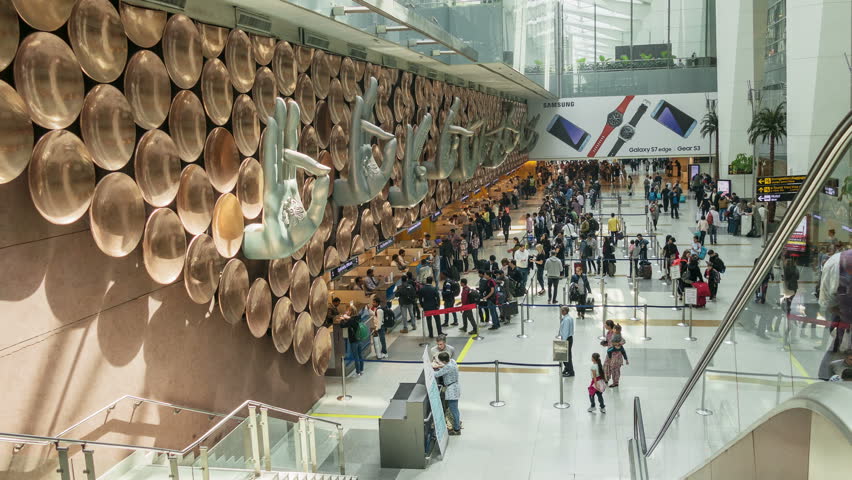 Allowing is my new mantra.

All the while I kept thinking how far Beijing is, and I couldn’t take the smile off from my face. Then I landed in a country where smiles multiply. I adore the Chinese, Chinese quarters and markets are my favorite parts of a city. I love their resourcefulness, their ability to adapt to everything, how quickly they learn local languages, how they get by in an unfamiliar city, how they form communities and retain their own identities. What a civilization… You discover that only when you visit the Forbidden City and walk the Great Wall of China. Vikram was already feeling at home. Modern nomads like him have friends everywhere, and there is nothing better than when, in an unfamiliar city, you have a local guide who isn’t motivated by money you’re paying. It’s remarkable what you get to discover, then.

The Chinese have no stance when it comes to copying – I’ve been hearing this all over the place. They only just recently educated themselves in regards to copyright laws. I was interested in traditional Chinese medicine and their teas. Real witches’ kitchens. When you ask someone about medicine, they say that they don’t really know its effects, since it’s been in use only for about a hundred years. Talking about Time. And integrity.

Vikram has become obsessed with I-Ching.

Before entering the Forbidden City – the ancient palace of the emperor of Beijing that was built in the early fifteenth century – you can see the same flower of life underneath the paws of Fu Dog (usually referred to as “Guardian Lions”). This was the home of 25 emperors from Ming and Ching dynasties. Could Fy Dogs represent not just guardians of the city and its residents, but also the guardians of knowledge about how the all-encompassing energy works?

Could the female Fu Dog represent a symbol of guardian of life force – since it’s always represented with a puppy at its feet – while the male partner represents the guardian of knowledge of how to access life force through energy, sustainable design, and change of consciousness?

Vikram was reading something from Thrive website. So that’s why we’re here, two guardian lions, male and female species. This is why I needed you, for this puzzle. Now we can go to India.

I’ve told him already about all the coded messages I found on my ranch that were left for me by my grandmother. I showed him a photograph which shows an Indian man wearing a turban on his head. Of course, we are going to Amritsar. The place where they took the photo is the Golden Temple. That’s where we’re headed.

Accept that there is nothing unusual now.

Everything is connected and will reveal itself to us.

It’s wonderful having him with me all this time, playing the role of an explorer, guide and partner. And even though I’m resisting in my head, every part of my body, every cell is enjoying the way things are falling into place. Alignment. There is no going back.

He doesn’t argue with himself, he explores, we’ll see what happens. We are simply following our intuition, and after entering The Forbidden City, we entered New Delhi from where we continued on o Amritsar. It’s located all the way North, close to the border with Pakistan. Everything was happening so fast, that I had a feeling we were in a time machine. Flying from one place to another, no stopping, but at least our conversations were long-lasting, so we are rested, and we sleep well. We hold each other’s hand and we sleep in the same bed, but there is no sex. At least that’s how it was in China. None of us were bothered by it, it only made us feel closer to one another, and it was romantic. Cuddle club again.

So, I was napping in the car while we were driving towards a house that will be our home in the next… well, I don’t know how long, since I don’t even know why we’re here, and time has stopped being important. I’ve been ignoring messages from my friends, not caring to explain where I was, why I wasn’t posting to Facebook or Instagram. I may have tweeted once There is great love here and that was that. Everything ceased being important. I told Vladimir I had to go, that there was something I had to research by myself. He understands me even when he doesn’t understand.

Then I opened my eyes because the car has stopped in front of the most beautiful house and garden that you can imagine. At least I’m not a fan of modern architecture, and I prefer old buildings and places with soul to contemporary buildings where people live on top of each other. And that’s how they feel, too. This was one of those old colonial houses whose walls have patina and a crack here and there. On the one side, it’s covered in green vines attacking the windows, giving them an irresistible charm that immediately introduces you into a fairy tale or “great expectations”.

– Welcome to my Indian home – Vikram opened the door.

– Vikram, this place is magical. Whose is it, who is our local host now?

– This is mine now. It used to belong to my grandfather.

– Yes, all that, but there is something more important. I can’t wait to tell you. I think it’s finally time I revealed who was the person standing next to your grandmother in that photo. I’ve been waiting until we got here, and all that pretending didn’t feel good at all. One you go in… – He motions toward the big living room which was crowded with old furniture and photos.

– Look to the wall on your left.

I am tiptoeing around, not to disturb the spirits, feeling enchanted. Ecstatically enchanted is more like it. On the wall, there is an enlarged oil painting of my grandmother and an Indian man wearing a turban. On the table underneath the painting, lay a few more photographs of my grandmother Olga and the Indian guy with a turban. Black and white photos, carrying a gentle scent of the past.

– The Indian with the turban, as you call him, is my grandfather.

– Who are we, Vikram? How did they meet, where, how did one Russian girl meet an Indian with a turban all those years ago… And how did we meet?

– It was inevitable. They set it up for us. Remember how when you wrote to me I couldn’t stop thinking of you, and how, when we first meet, we acted as though we already knew one another… I am an explorer, rational skeptic, and recovering cynic, so I wanted to know why. Even though I’ve barely been able to control myself, I had to know what this was all about. And to become the story.

– This is a real story. And this place is like magic – I’m in trance.

– My grandfather will explain everything to us tomorrow. He is in The Golden Temple.

For now, the only thing I know is that we are in the right place, you and I. We have a mission. And it’s more than just that of male-female relation. I don’t know what it is exactly… – he kisses my nose, forehead and kneels in front of me.

– Why do you, Vikram, bring me to these places, and how do you appear everywhere where my grandma used to be and is it all related…

– This is even stranger for me than it is for you.

– Home? Home brought you here, your search for a home to be exact.

He lifts me up into his arms and takes me into a room.

– But this is the place and time for making love.

That night was mysterious, emotional, grand, out of this world. It was like we were in a vortex of time with no time, in space where everything was possible. We had an underlying well of energy that kept replenishing itself, one orgasm ended and we were immediately in the mood to continue, the next climax coming. Neither one of us tired, nor exhausted, as if each orgasm rejuvenated us. Eons were interchanging, and in the end, I had a feeling that we were both coming apart like a lotus flower, only to be reassembled in the same way. That I was him and he was me. Like every trauma I have ever experienced was being cleansed from me, every cell restored. I cried and I laughed too. India, holy country, land of tantra, divine connection.

We fell asleep holding one another, enchanted and charmed. The only thing I noticed was that there were no more redundant thoughts. I had many questions to which I didn’t know the answer, but no more doubts. Somewhere along the way, I lost all that I wonder, therefore I am. This must be the place of clarity.

No work all play

The Kingdom of Heaven

We Are All In Transit